Exploratory Factor Analysis (EFA) is a statistical approach for determining the correlation among the variables in a dataset. This type of analysis provides a factor structure (a grouping of variables based on strong correlations). In general, an EFA prepares the variables to be used for cleaner structural equation modeling. An EFA should always be conducted for new datasets. The beauty of an EFA over a CFA (confirmatory) is that no a priori theory about which items belong to which constructs is applied. This means the EFA will be able to spot problematic variables much more easily than the CFA. A critical assumption of the EFA is that it is only appropriate for sets of non-nominal items which theoretically belong to reflective latent factors. Categorical/nominal variables (e.g., marital status, gender) should not be included. Formative measures should not be included. Very rarely should objective (rather than perceptual) variables be included, as objective variables rarely belong to reflective latent factors.

Rotation causes factor loadings to be more clearly differentiated, which is often necessary to facilitate interpretation. Several types of rotation are available for your use.

Promax (Use this one if you're not sure)

There are three main methods for factor extraction.

Use for a softer solution

Use this method if you are unsure

Tests hypothesis that correlation matrix is an identity matrix.

A significant result (Sig. < 0.05) indicates matrix is not an identity matrix; i.e., the variables do relate to one another enough to run a meaningful EFA.

A communality is the extent to which an item correlates with all other items. Higher communalities are better. If communalities for a particular variable are low (between 0.0-0.4), then that variable may struggle to load significantly on any factor. In the table below, you should identify low values in the "Extraction" column. Low values indicate candidates for removal after you examine the pattern matrix. 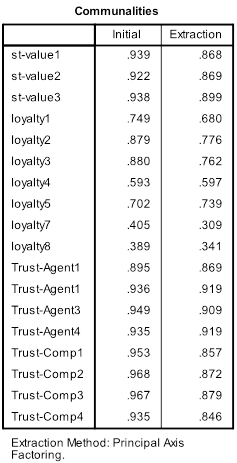 Factor structure refers to the intercorrelations among the variables being tested in the EFA. Using the pattern matrix below as an illustration, we can see that variables group into factors - more precisely, they "load" onto factors. The example below illustrates a very clean factor structure in which convergent and discriminant validity are evident by the high loadings within factors, and no major cross-loadings between factors (i.e., a primary loading should be at least 0.200 larger than secondary loading). 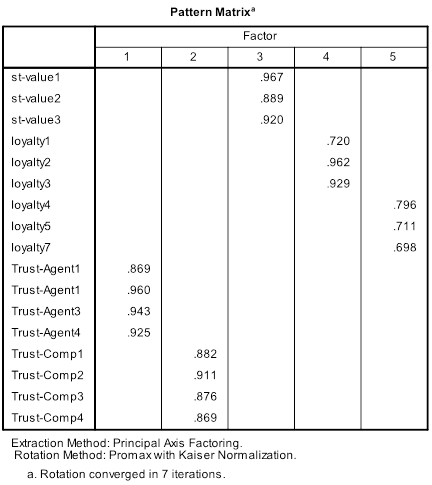 Convergent validity means that the variables within a single factor are highly correlated. This is evident by the factor loadings. Sufficient/significant loadings depend on the sample size of your dataset. The table below outlines the thresholds for sufficient/significant factor loadings. Generally, the smaller the sample size, the higher the required loading. We can see that in the pattern matrix above, we would need a sample size of 60-70 at a minimum to achieve significant loadings for variables loyalty1 and loyalty7. Regardless of sample size, it is best to have loadings greater than 0.500 and averaging out to greater than 0.700 for each factor. The table below is Table 3-2 from page 117 of Hair et al (2010). 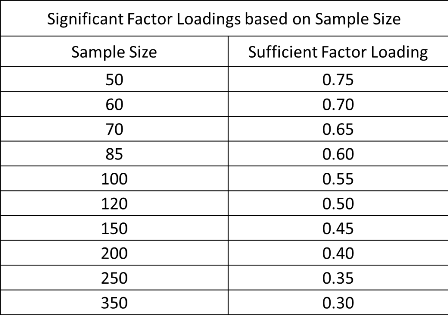 Discriminant validity refers to the extent to which factors are distinct and uncorrelated. The rule is that variables should relate more strongly to their own factor than to another factor. Two primary methods exist for determining discriminant validity during an EFA. The first method is to examine the pattern matrix. Variables should load significantly only on one factor. If "cross-loadings" do exist (variable loads on multiple factors), then the cross-loadings should differ by more than 0.2. The second method is to examine the factor correlation matrix, as shown below. Correlations between factors should not exceed 0.7. A correlation greater than 0.7 indicates a majority of shared variance (0.7 * 0.7 = 49% shared variance). As we can see from the factor correlation matrix below, factor 2 is too highly correlated with factors 1, 3, and 4.

What if you have discriminant validity problems - for example, the items from two theoretically different factors end up loading on the same extracted factor (instead of on separate factors). I have found the best way to resolve this type of issue is to do a separate EFA with just the items from the offending factors. Work out this smaller EFA (by removing items one at a time that have the worst cross-loadings), then reinsert the remaining items into the full EFA. This will usually resolve the issue. If it doesn't, then consider whether these two factors are actually just two dimensions or manifestations of some higher order factor. If this is the case, then you might consider doing the EFA for this higher order factor separate from all the items belonging to first order factors. Then during the CFA, make sure to model the higher order factor properly by making a 2nd order latent variable.

Face validity is very simple. Do the factors make sense? For example, are variables that are similar in nature loading together on the same factor? If there are exceptions, are they explainable? Factors that demonstrate sufficient face validity should be easy to label. For example, in the pattern matrix above, we could easily label factor 1 "Trust in the Agent" (assuming the variable names are representative of the measure used to collect data for this variable). If all the "Trust" variables in the pattern matrix above loaded onto a single factor, we may have to abstract a bit and call this factor "Trust" rather than "Trust in Agent" and "Trust in Company".

Reliability refers to the consistency of the item-level errors within a single factor. Reliability means just what it sounds like: a "reliable" set of variables will consistently load on the same factor. The way to test reliability in an EFA is to compute Cronbach's alpha for each factor. Cronbach's alpha should be above 0.7; although, ceteris paribus, the value will generally increase for factors with more variables, and decrease for factors with fewer variables. Each factor should aim to have at least 3 variables, although 2 variables is sometimes permissible.

An example of formative versus reflective constructs is given in the figure below. 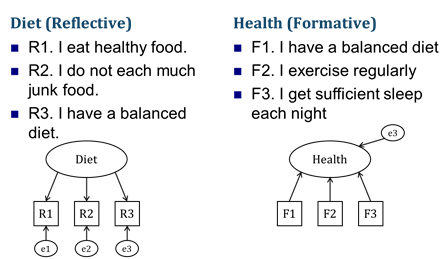 1. EFA that results in too many or too few factors (contrary to expected number of factors).

2. EFA with low communalities for some items.

Some Thoughts on Messy EFAs

Let us say that you are doing an EFA and your pattern matrix ends up a mess. Let’s say that the items from one or two constructs do not load as expected no matter how you manipulate the EFA. What can you do about it? There is no right answer (this is statistics after all), but you do have a few options:

1. You can remove those constructs from the model and move forward without them.

2. You can run the EFA using a more exploratory approach without regard to expected loadings. For example, if you expected item foo3 to load with items foo1 and foo2, but instead it loaded with items moo1-3, then you should just let it. Then rename your factors according to what loaded on them.

3. You can say to yourself, “Why am I doing an EFA? These are established scales and I already know which items belong to which constructs (theoretically). I do not need to explore the relationships between the items because I already know the relationships. So shouldn’t I be doing a CFA instead – to confirm these expectations?” And then you would simply jump to the CFA first to refine your measurement model (but then you return to your EFA after your CFA).

Why do I bring this up? Mainly because your EFAs are nearly always going to run messy, and because you can endlessly mess around with an EFA and if you believe everything your EFA is telling you, you will end up throwing away items and constructs unnecessarily and thus you will end up letting statistics drive your theory, instead of letting theory drive your theory. EFAs are exploratory and they can be treated as such. We want to retain as much as possible and still be producing valid results. I don’t know if this is emphasized enough in our quant courses. I also bring this up because I ran an EFA recently and got something I could not salvage without hacking a couple constructs. However, after running the CFA with the full model (ignoring the EFA), I was able to retain all constructs by only removing a few items (and not the ones I expected based on the EFA!). I now have excellent reliability, convergent validity, and only a minor issue with discriminant validity that I’m willing to justify for the greater good of the model. I can now go back and reconcile my CFA with an EFA.

For a very rocky but successful demonstration of handling a troublesome EFA, watch my SEM Boot Camp 2014 Day 3 Afternoon Video towards the end. The link below will start you at the right time position. In this video, I take one of the seminar participant's data, which I had never seen before, and with which he had been unable to arrive at a clean EFA, and I struggle through it until we arrive at something valid and usable.